The caravan ride had been a rough one for all its passengers, of course caravan travel is never easy with rough roads and tightly packed travelers. This caravan however was the one to pass closest to the Borderlands and as such everyone was on edge, especially one small family sitting across from a solitary robed individual that had not stirred since the caravan began. He had already been seated before the other passengers arrived and made those that would sit next to him give him a wide berth. As such, in this tightly packed caravan, the solitary traveler had an entire bench to himself.

The small family made up of a father, a mother, and a small girl had done everything possible to divert their attention from the traveler throughout the trip much like the rest of the passengers and while this was easy for the adults, a small child could not manage the feat eventually simply staring at the stranger. Her gaze so fixed she eventually dropped the small toy she had clutched to her chest for the length of the trip. The entire wagon gasped knowing that in order to retrieve the toy they would have to move nearer the stranger and all dreaded the though, yet the toy never touched the floor of the rickety wagon. With a deft movement the stranger plucked it out of mid air and held it in front of him and for the first time during the journey, he spoke.

“It’s interesting the things we hold on to for comfort.” he said in a strange accent. He seemed to examine the doll though no one could make out his eyes or face hidden deep under his hood. He paused for a moment and then continued, “As if some simple material thing will protect us from all the dark evil things in the world. Let me share with you all that the darkness you know pales in comparison to that which will come.” The child reached for her toy but the stranger made no move to return it, instead flipping it over to continue his examination. “Of course you people of the surface know nothing of the hardships of others, so I shall share with you that which I have endured.”

“I was trained from an early age to kill and be ruthless, to only recognize and seek power above all else for those that don’t control the power are mere cattle to those that do. Trained daily, I took my first life at the age of seven and felt no regret, no, in fact it drove me forward because it reinforced that which I had been told daily, If you’re not at the top of the mound of bodies, you’re somewhere under it.”

With that the entire caravan who had been listening silently let out a collective gasp from the breath they had been holding since the stranger first spoke. Then the stranger, almost as if relishing their fear paused for a moment, only to continue his voice dripping with a cold scorn.

“Yet despite my excellence in my training and my birth in a noble house, my people would turn on me as soon as the opportunity presented itself. At the age of nineteen I set out on a quest to prove my worth and increase the power of my house and while I found that power, I was shunned for it. You see the Priestesses in their limited view of the world feared what I had found and that it might sway the matriarchal view of the people, in turn causing them to lose the power they so coveted over their people. And so I was exiled with the blessing of my own mother, never to return to my home or my own people. Instead banished to roam the overworld of sheep. Ah, but I found a silver lining to the curse. The same being that gave me tremendous power warned me of a blight coming to the land, a blight I can combat and in doing so gain in power to the point that one day I will march over the bodies of those who turned on me and retake my home.”

“So while you stare at me in fear I tell you this. You have nothing to fear from me now as there would be no power from harming you and I have no interest in your world other than the fact that if your world falls mine will follow. So I, who you fear will save your world for now and you will know live as a result of my actions.”

With that the stranger stood and opened his eyes to reveal a dark red glow. All the passengers of the caravan simultaneously cowered back in their seats with the final confirmation that they were that they were in the presence of one of the legendary Dark Elves. The stranger moved toward the small girl and while she still stared in awe her parents clutched her tight in fear. However the stranger simply lay the small toy upon the child’s lap and began to move toward the back of the wagon, the other passengers pressing hard against the sides as he passed to yield way. Upon reaching the back of the wagon the stranger turned and lower his hood in the moonlight to reveal striking features of gray skin and flowing white hair. However as the moonlight struck him it revealed another surprising feature. Fey markings glowing in the moonlight on the left side of his body. With a smirk the stranger spoke again.

“No, you have nothing to fear from me as I will save many of you from the coming storm, only Lloth, her priestesses, those that turned on me, and those that would stand in the way for my quest for power should fear me for now as I do not want anything the overworld has…. yet.”

And with a flurry of his robes the stranger disappeared out of the back of the wagon. All the passengers let out another collective gasp with the exception of the small girl who starred smiling where the dark stranger had once been, knowing that there was something that was fighting the darkness. 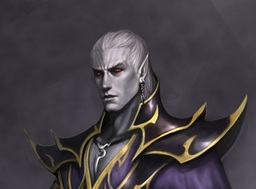